A new analysis from the University of Minnesota’s Accessibility Observatory has quantified how much the Green Line light-rail transit route and related changes to the regional bus network changed residents’ ability to reach jobs by transit. The study measured access to jobs in Minneapolis and St. Paul before and after the Green Line began service on June 14, 2014. 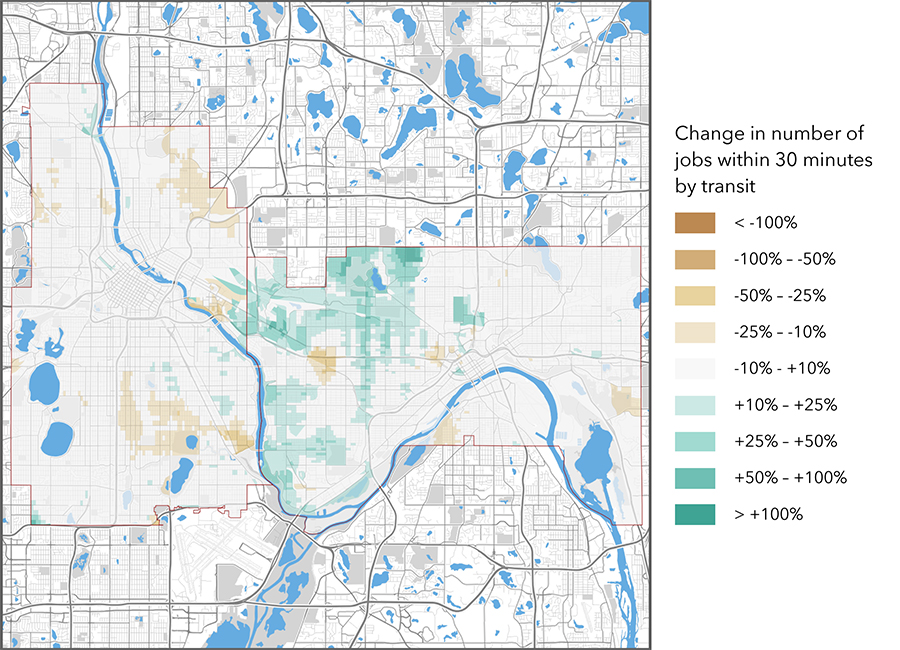 “Changes were greatest in St. Paul, where most of the Green Line’s stations are located,” says Andrew Owen, director of the Observatory. “A year after the opening of the Green Line, workers in St. Paul can, on average, reach over 2,000 more jobs within 30 minutes by transit than they could previously—a 5.3 percent increase. In locations near Green Line stations and connecting transit routes, accessibility often increased by over 50 percent, and in a few locations more than doubled.”

In Minneapolis, changes were minor, and in most cases were due to service or schedule changes unrelated to the Green Line project, he says.

For the analysis, researchers measured the number of jobs that can be reached by transit within 30 minutes of travel between 7 and 9 a.m. from each census block in St. Paul and Minneapolis. They evaluated accessibility for three scenarios:

“By comparing the hybrid scenario with both 2014 and 2015, it’s possible to estimate the accessibility impacts of the Green Line itself separately from the impacts of changes to connecting routes in the regional bus network,” Owen explains.

The results suggest that had the Green Line been implemented without any supporting changes to the regional bus network, accessibility benefits would have been limited to areas near the new rail stations. “The relatively low residential density of the area means that a single transit line, whether bus or rail, can reach only a small minority of residents,” Owen says. “But a well-designed network of routes can provide access to a much larger area and can help distribute the benefits of new investments like the Green Line throughout the community.”

Owen notes that the analysis did not look at other effects of the Green Line, such as reliability and passenger comfort. “It’s likely that the Green Line provides far more reliable travel times than did the bus routes it replaced, which operated in mixed traffic,” he says. Additionally, the analysis does not reflect potential travel time improvements to jobs that could already be reached in less than 30 minutes.

The analysis was sponsored by the Center for Transportation Studies and the Department of Civil, Environmental, and Geo- Engineering.