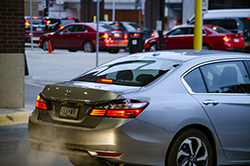 Access Across America: Auto 2019, which estimates the impact of traffic congestion on access to jobs, shows congestion delays increased in 31 – or 62% – of the top 50 U.S. metropolitan areas.

The study also shows the change in accessibility for each metro since last year. Though rankings of the top 10 metro areas for job accessibility by auto only changed slightly from the previous year, access to jobs by auto increased in 78% of the largest U.S. metros.

For example, the Minneapolis–St. Paul metro area again ranked 6th in terms of job accessibility but 28th in the reduction in job access due to congestion. Though average worker traveling by auto in the Minneapolis metro can reach 893,707 jobs within 30 minutes, those workers reach 31 percent fewer jobs in the same amount of time during congested periods.

Key factors affecting the rankings for any metro area include the number of jobs available and where they are located, the road network structure, traffic management practices, the provision of alternate transportation modes, and population size, density, and location. Better coordination of transportation systems with the location of jobs and housing will improve job accessibility by auto.

The findings have a range of uses and implications. State departments of transportation, metropolitan planning organizations, and local government agencies can apply the evaluations to performance goals related to congestion, reliability, and sustainability. In addition, detailed accessibility evaluation can help in selecting between project alternatives and prioritizing investments.

The research is sponsored by the National Accessibility Evaluation Pooled-Fund Study, a multi-year effort led by the Minnesota Department of Transportation and supported by partners including the Federal Highway Administration and additional state DOTs.